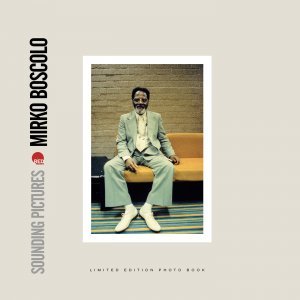 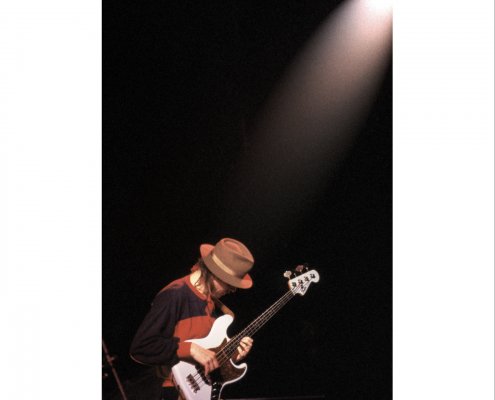 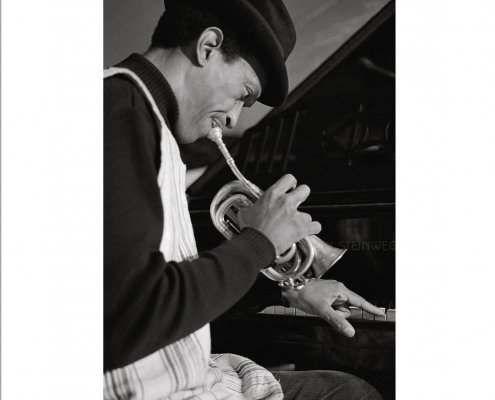 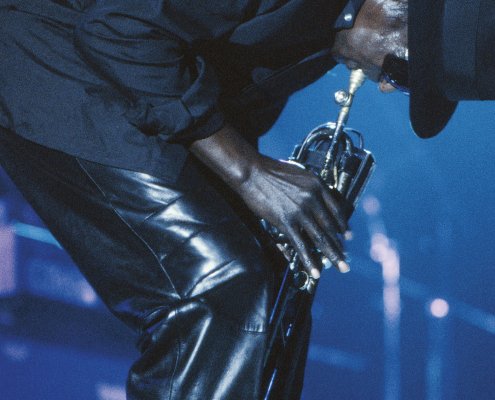 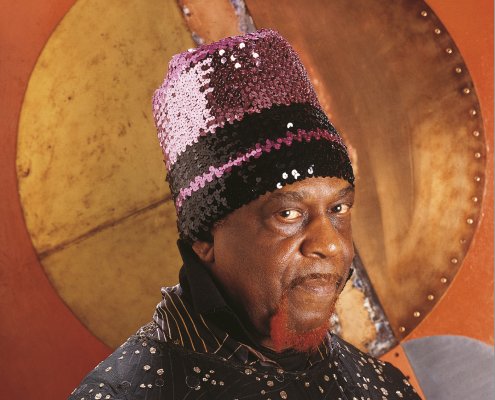 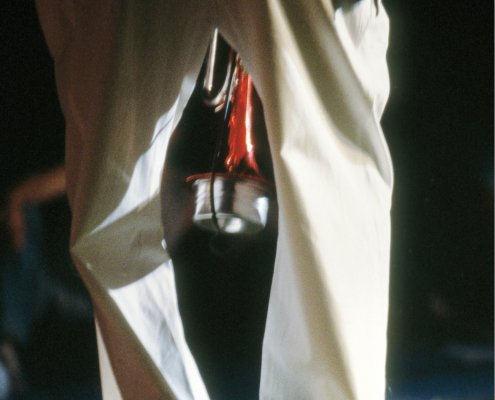 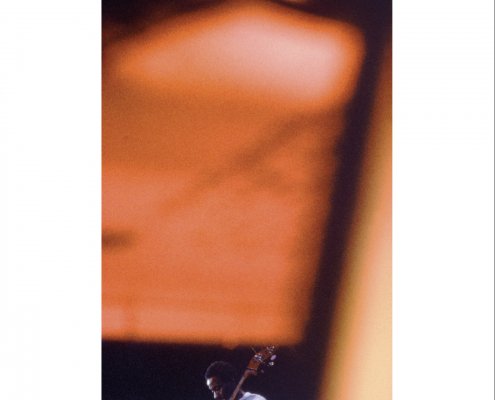 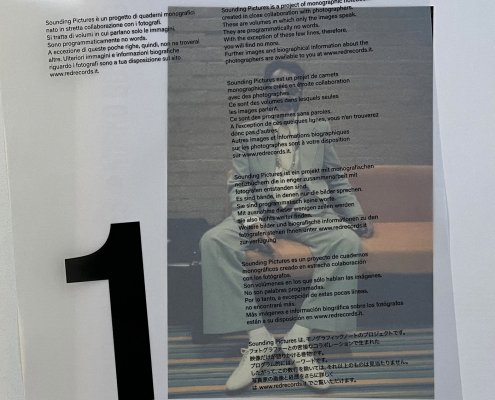 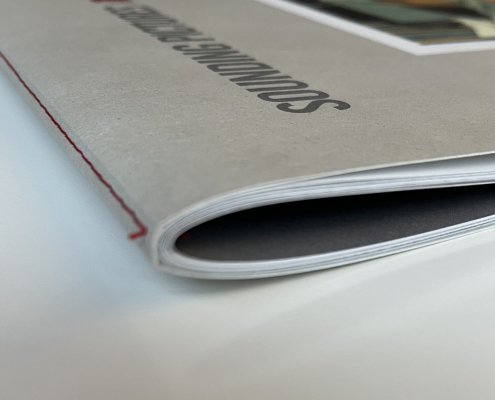 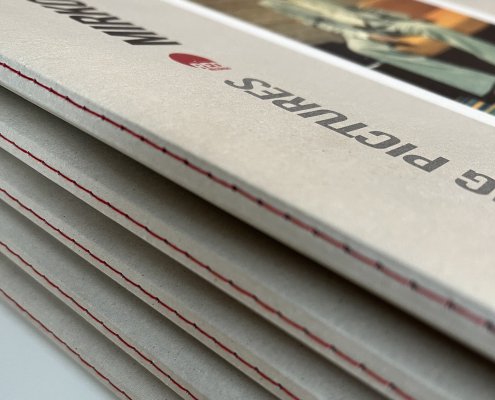 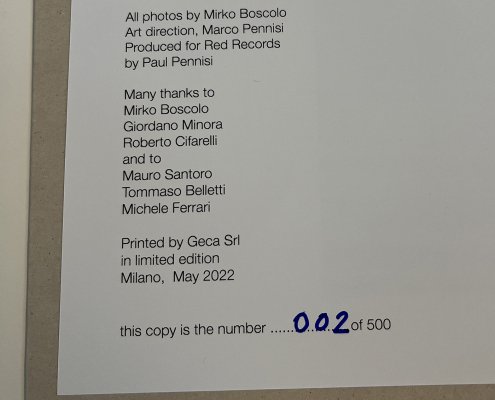 The series is inaugurated with shots by Mirko Boscolo, enfant prodige of jazz photography, who earned the attention of insiders and the admiration of readers even as a young man for his special look at the great figures of jazz. He signed many covers for Musica Jazz and found in Arrigo Polillo, founder of the magazine and for a long time its most beloved editor, a great admirer who says of him:

“Those who attend jazz concerts invariably see Boscolo at work a stone’s throw from the stage; they often see him then slip into the dressing rooms where the musicians are resting or preparing for the concert: there they are more ‘themselves’, and that is what interests Boscolo above all. It should be pointed out, however, that Mirko never ‘undergoes’ the image, but inserts it into a clear, personal aesthetic and compositional vision’.

This volume presents a selection of more than twenty years of photographs. It alternates between ‘stolen’ shots, studio work, on stage or in the dressing room. Even within the limits dictated by the selection, the variety and richness of this vast production emerges: colour and black and white, great protagonists of the international scene such as Gillespie, Fitzgerald, Blakey, Mulligan, Dolphy, Jamal, Davis, Jarrett, Petrucciani to name but a few, and many Italians. There is, however, a common element to this variety, a factor that connotes all of Boscolo’s work: a gaze that is always attentive to catching a gesture or a surprising, melancholic, reflective, and often even light-hearted moment.

A note and biography of Mirko Boscolo

Born in 1952 in Chioggia, an island in the Venetian lagoon.

Graduated in Photography at the Istituto Umanitaria in Milan in 1978

As a child, Mirko listened to the sound of the sea and the wind and this sound would inspire him, as an adult, to become involved in music and art and then, once the creative fever was over, to find his ideal dimension in the life of a sailor.

My photographic research on Jazz, some of the results of which are presented in this book, began almost as a game in 1978, when I was still a student and already a music lover, and began attending concerts with my Nikon F.

Some of the first shots ended up on the table of Arrigo Polillo, editor of Musica Jazz and from there on the covers of the prestigious magazine.

Stimulated by this immediate recognition, I embarked on a real photographic investigation into the world of jazz. First, by stealing images from musicians on stage, then – space on stage is so limited…. – seeking not only professional but also human contact in their dressing rooms. And finally by finding in festivals and studio portraits the most creative environment to do my work.

You will find the most exhilarating moments in this book, which is not so much, or not only, a gallery of portraits, but is above all a series of images in which the musician is a part of the frame, the thread of my personal aesthetic research.

A testimony by Arrigo Polillo, Milan 1980

“One of the most enjoyable aspects of the work of someone who, like me, edits a magazine dedicated to jazz music, is examining the photographs that arrive, every month, on my desk. For two reasons: because the world of jazz offers innumerable cues for a photographer with a shrewd ‘eye’ and taste, and because (but this is a consequence of the first reason) the photographers who devote their attention wholly or predominantly to the men of jazz are for the most part valiant. It is a fact that ‘Musica Jazz’, the magazine I edit, has, over the years, availed itself of the collaboration of innumerable outstanding photographers, the names of some of whom (I recall two: Ugo Mulas and Giuseppe Pino) are today known throughout the world to those who deal with the photographic art. Mirko Boscolo is a fairly recent acquaintance for me, but the quality of his photographs, which my magazine has published in large numbers, have earned him the admiration of readers and colleagues in a very short time.

Boscolo is young: he was born in Chioggia in 1952. He became interested in photography very early on, so much so that at some point he decided to make photography his profession. When he was still living in Gallarate, he started attending a photography school in Milan, where he eventually decided to live.

Those who attend jazz concerts invariably see Boscolo at work just a stone’s throw from the stage; they often see him then slip into the dressing rooms where the musicians are resting or preparing for the concert: there they are more ‘themselves’, and this is what interests Boscolo above all.

It should be pointed out, however, that Mirko never ‘undergoes’ the image, but inserts it into a clear, personal aesthetic and compositional vision.

Like all outstanding photographers, Boscolo has also taken a particular interest in the work of some masters of photography: among them he mentions Arnold Newman, Paul Strand and Richard Avedon.

However, what inspires him in his work as a jazz photographer is, first and foremost, jazz and its musicians, in whom he has always felt a great interest.